There are so many little things to keep track of for a successful animation shoot. Paper that doesn’t want to lay flat must be controlled. Things that could move when they shouldn’t must be locked down. Hands that won’t hold things need to be firmly attached to them. And a puppet that needs to leap or carry something too heavy for its foot magnets to support must be rigged.

Here are some of the ways I have secured my props and puppet recently:

The star map was too heavy and slick for my puppet to hold, so I sewed his hands to it. On the reverse side from the camera, you can see where the thread stretches between his hands.

The map is made of heavy paper and would not lay flat so it is held down with magnets placed out of frame. The set has a metal sheet under the paper mache.

Strong magnets hold the map in place as the puppet unrolls it. Without them the roll would be very loose and uncontrolled.

Sometimes the puppet has trouble standing up on one magnetic foot so I tuck a few tiny magnets under his raised foot to balance. In this shot, it could not be seen from the camera angle used. If I have to do this for an angle where they show, I can mask them out using Adobe After Effects.

In preparation for rigging my puppet for his leap between rocks, I sewed a T-nut to his side that will be away from the camera. I ended up sewing a T-nut to the bag too because it is so heavy it was making him tip on the rig.

The wire rig is attached to the T-nut.

The first of three rigs used in this shot is placed behind the rock the puppet jumps from. The second rig is suspended from the ceiling and the third is on the rock that he is leaping to. He needed the rig for walking on the rock because the bag is too heavy for him to stay upright on his foot magnets. It was designed to be dragged but I chose to have it slung over his shoulder for the jump. 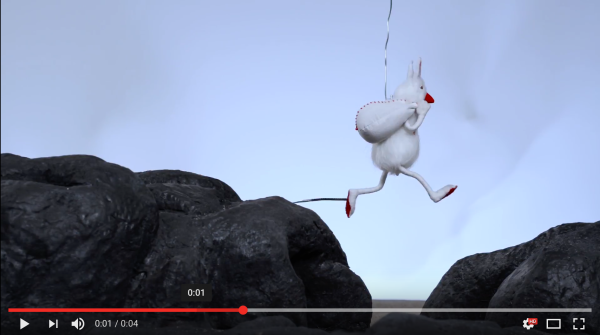 Here you see the overhead rig holding him up and a line of tiny magnets attached to a screw on the rock to keep him from spinning. If you click this link you can see the partially completed rig removal. The first 42 frames have had the rig masked out using Adobe After Effects and the rest of the shot is still in progress.

Support Seed in the Sand